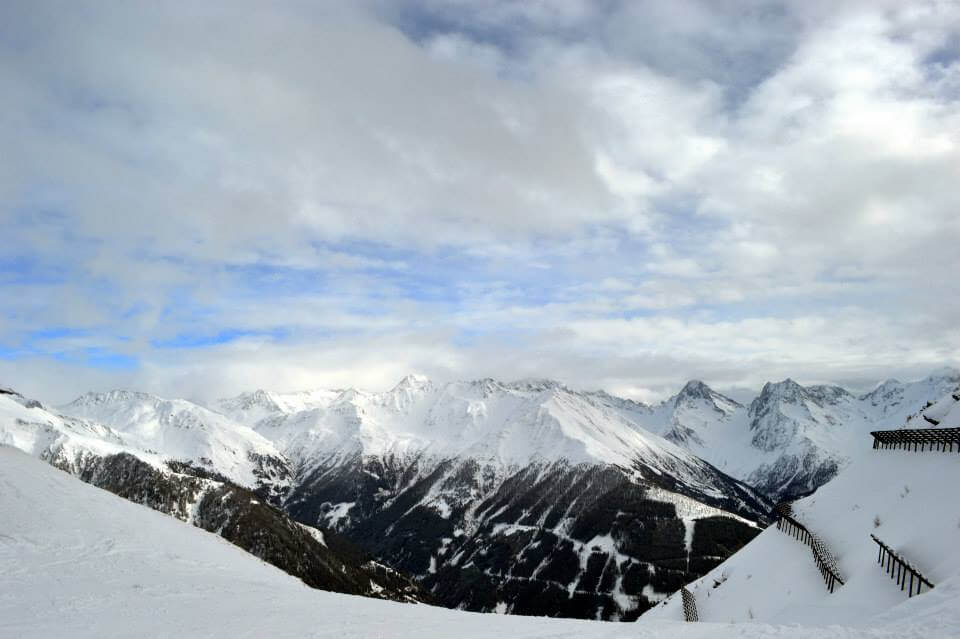 Skiing in Austria: How It Helped Me (Almost) Overcome My Fears

Exchange students go to school, but we also like to look for opportunities to not be a student. The most stunning and challenging trip during my exchange year was skiing in Austria. A total of 40 exchange students, including myself, skipped school for a week to ski on Großglockner, the highest mountain in Austria.

I felt confident in my skiing ability, despite never having skied a black diamond. My dad and I spent several weekends skiing in Pennsylvania’s mountains growing up. I thought I was prepared for any mountains.

When I registered for the ski trip, I paid less by not registering for ski lessons. The lessons felt unnecessary because they were for beginners. I didn’t consider myself a beginner. But I also hadn’t considered how big the highest mountain in Austria actually is and how steep those slopes are.

I realized too late the easiest slopes (aside from the bunny hills) would probably be considered black diamonds in Pennsylvania. I was scared. Did I mention I have a fear of breaking my neck? This very fear prevented me from skiing bigger slopes in Pennsylvania and caused a lot of trouble for me in Austria.

Imagine having to change gondolas several times, each ride about ten minutes long, just to get to the top of the slope. The mountains were absolutely massive!

I confided in a close friend my fear before our first slope. She promised I am a better skier than I thought and the group wouldn’t leave me behind. I was way out my league though. The group consisted of a Canadian ski instructor, a boy who has skied with his Olympian uncle, and other people who practically lived on the slopes. Then there was me with a handful of weekend experiences on Pennsylvania’s mountains.

But the only way back down is to ski down, so ski I did.

I was doing pretty well. I skied at a comfortable speed and wasn’t too far behind the group. My confidence was building…until I picked up too much speed on a steep drop I didn’t see coming and fell. My skis were running down the mountain and everything! It was extremely embarrassing!

After a few more times down the slopes, along with several more falls, I still did not feel comfortable. I ended up going back to the lodge every day around lunchtime. Still, I got back out there every day.

One day I took a really bad fall and felt shook up. Although I wasn’t injured, I decided to take the rest of the day off, plus the next day to settle my nerves. Falling on my head is too close for comfort.

I think this head fall finally made the Rotary counselor/student herder recognize my lack of confidence in skiing. She later asked me why I didn’t share my concerns with her. I didn’t know why then, but now I realize I usually remain silent rather than voicing my discomfort with something.

No, I did not expect the counselor to read my mind. Sure, I said something on day one to a friend, but it was more along the lines of, “I didn’t realize how big these slopes are” instead of, “I’m really freaked out by these slopes and am considering jumping off this gondola while we’re still kind of close to the ground.”

The counselor pulled some strings for me. On the very last day, I was able to ski with the lesson group without an additional cost. Not only could I ski confidently with a group, but also with several friends.

I had the freedom to ski at my own pace. I even took advantage of my first ski jump! It should barely be considered a jump because it was only a few inches off the ground, but I’ll take it.

The instructor critiqued a few things about my skiing, which prepared me for a night ski run. Everyone skied down a red slope with one candle per five skiers. Considering how icy the snow becomes at night, it was no easy task but it sure was fun.

Resort Kals-Matrei: The Best Spot for Skiing in Austria

Although I only skied until lunchtime about every day, my afternoons were not filled with lounging around the lodge. My Brazilian friend Caro injured herself almost immediately on the first day (too bad this post didn’t exist then) and couldn’t ski the entire week. We would ride the gondolas to Adler’s Lounge, an award-winning restaurant and hotel on top of Großglockner. We loved enjoying the views and eating the chocolate cake with fresh Alpine milk.

Viewing the Austrian Alps really is an experience. The mountains appear fiercely endless. Tops of the mountains disappear behind the clouds. The intense blue sky and crystal white snow effortlessly collide to always create a picture ready to capture your breath. A skier or snowboarder would rush by and gradually become a dot against the grandness of the landscape. All you can hear is the wind running through the trees and skis hitting the snow.

After describing the rewarding views in the evenings to the group, several people joined Caro and me on the slopes by foot (and crutches). My time in the Austrian Alps was a little more well-rounded than those who skied all day every day. I paid to ski, and I did ski, but this isn’t the only ski resort in the world. But those views are once in a lifetime. Most of the other exchange students never stopped to really appreciate the scenery as I had.

My ski trip in Austria didn’t turn out the way I imagined it would. I can’t exactly say it turned out better, but it did turn out well.

On my next ski trip, I’ll be sure to push myself mentally to ski more because I really do enjoy skiing. This doesn’t mean I’d change a single thing about this particular ski trip though! Well, except for Caro getting injured; I’d prevent that if I could.

When is the last time you had to tap out because you were pushing your fears too much? What did you do instead? Share in the comments below!