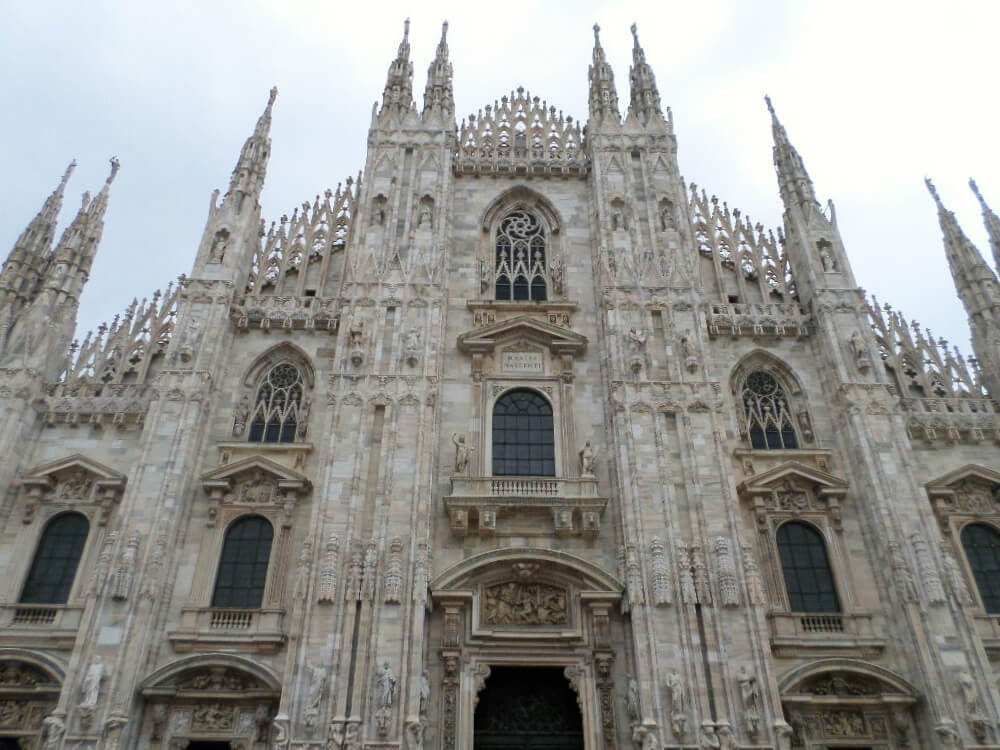 Italy’s Travel Scam: How to Avoid It (And Save Your Money)

If you’re visiting Italy soon, specifically Milan, you’ll want to avoid Italy’s travel scam. Save yourself the headache of pestering men and save your money with these tips!

“Remember–-walk in the middle of sidewalks, and don’t hold the pigeons.”

My tour guide in Milan shared this warning about Italy’s travel scams with us before parting. Half of the group, those lingering in the back and talking during the tour, did not hear her warning at all. Although I heard the warning, I felt as clueless as the exchange students lingering behind.

My district had completed one week of a two-week Europe tour. As you may suspect, we barely scratched the surface of Europe in such a rapidly-moving tour, but it was a great introduction to Europe. Forty exchange students are difficult to manage, so the group counselors booked a tour in each city and then let us roam independently until dinner at the hostel.

On this particular day, my morning was off to a rough start for a teenage girl. My counselor wouldn’t let me go on a horseback tour in the mountains on the outskirts of Milan (as I said, problems for a teenage girl). I also learned my fourteen-day Europe tour had cost the same as a different district’s month-long Europe tour. I felt cheated of my hard-earned money. Both of these reasons are likely why I subconsciously decided to not adhere to the tour guide’s warning.

For some unknown reason, my friend Anna and I wanted pictures with the dirty pigeons at Piazza del Duomo. This was before Instagram, so we weren’t doing it for the ‘gram! We thought it would turn out to be a cool photo, though. An Italian man offered Anna birdseed and she quickly accepted. Naturally, pigeons jumped onto her arm to eat the seeds. I snapped a few photos before we traded roles as model and photographer. That’s when I realized the Italian man wasn’t offering, rather forcing, his birdseed into my stupid American tourist hand. It was too late to refuse–my hand was already full of birdseed. 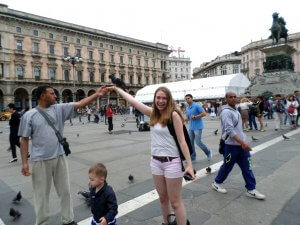 After a series of pictures, Anna and I quickly thanked the man and walked away. We had a strange feeling about him and wanted to move on. He protested our departure by speaking rapid Italian, a language neither Anna nor I understood. We asked him to explain in English or German, but this man continued to speak in Italian. “No English,” he said, “no English.” Anna and I, only seventeen and sixteen years old, were confused and, frankly, scared.

What is happening? What is he saying? Why won’t he let us leave?

Suddenly, I remembered advice our tour guide shared earlier–“Be careful of scammers.” I grabbed Anna’s hand and pulled her away as she tried to reason with the man. I whispered to her, “He wants money.”

Anna and I wanted this man gone. We looked at each other with nervous eyes and realized the only way he would leave is if we gave him money.

But we had just arrived in Italy from Switzerland. Anna only had Swiss Franks and I only had a twenty Euro bill plus some Franks. I tried to give the Italian man spare change, but it wasn’t enough for him. Finally, I shoved the twenty in his hand and we walked away.

We fell for one of Italy’s travel scams.

I guess it was that man’s lucky day. He made quite the profit off two handfuls of birdseed.

We Fell For Italy’s Travel Scam

At the end of the day, I learned from our counselor that Anna and I could’ve threatened to call the police. The Italian man would’ve immediately left us alone because many of Italy’s travel scams, including this pigeon scam, is illegal.

Anna and I weren’t the only ones duped that day. We spotted many tourists walking near the edges of the sidewalks. Other scammers could easily tie a bracelet to a passerby’s wrist without the tourist noticing. Removing this bracelet would break it, thus forcing the innocent patron to buy the bracelet.

I did get the picture with pigeons I desperately wanted, but at a high cost (especially for a teenager). I tried to think up something positive about my interaction with the Italian scammer. Perhaps that man now has money to feed his family for the night, I thought. According to our tour guide, most of those men will gamble the money away. I prefer my made-up story. 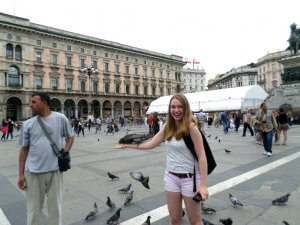 Falling for Italy’s travel scam taught me my first major travel lesson. Although I read advice on how to avoid scams before the incident, it didn’t stick until I faced a scam head-on. Hopefully, you can learn from my mistakes!

One bad incident doesn’t have to ruin the entire destination. Things may go wrong while on the road; in fact, something probably will go wrong. I was bitter about the scam for the rest of my time in Milan. Looking back, I didn’t give the city a second chance. I missed out on experiencing Milan’s fashion and impressively seamless mix of modern and historic architecture.

Scams and theft happen, but you can take steps to avoid it as best you can.

Pin this post for later! Tell me, have you fallen for a travel scam? 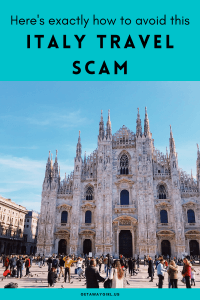