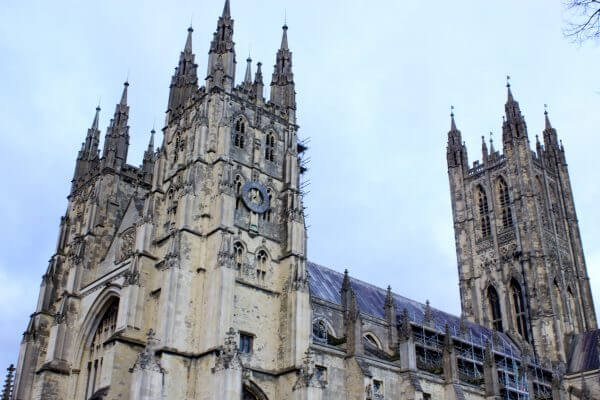 This Evan Evans day tour, comprised of visiting the world’s most romantic castle, seeing France from the top of the beautiful Cliffs of Dover, and walking the cute and historical town of Canterbury, was supposed to be the highlight of my trip. I looked forward to writing this Evan Evans review.

But my day started off on the wrong foot.

I woke up late and probably looked like Velma for ten minutes when I couldn’t find my glasses. The female-only showers were under maintenance, only complicating my morning routine. The free breakfast croissants were over-done and the hostel didn’t offer many other food choices. I was also late leaving the hostel. After running to the nearest Tube stop, jumping into tubes while the doors were closing, and sprinting to Victoria Coach Station, I arrived on time.

But, the tour left 30-minutes late. My need for punctuality adopted from Germany was annoyed, especially after all that running. Determined to make the most of the day, I found a seat to myself on the bus and took a deep, calming breath.

Then our tour guide Rita rambled. I’m sure she presented some important or interesting information, but I struggled to stay engaged. Eventually, I gave up and watched the city turn into the countryside. Sorry Rita!

Michelangelo, the Italian bus driver, drove like, well, an Italian. He ran several red lights. At one point, I realized I was holding my breath out of fear. The unexpected snowfall didn’t help my safety concerns, either.

Once stopped in the parking lot, Rita shared everything there is to know about Leed’s Castle for five minutes.

Timing is everything, and the timing was not right. We wasted tour time on the parked bus for her to spit out some unorganized facts about the castle. Guests were gathering their belongings to exit the bus while she was talking, causing too much noise to hear anything she said. The information was shared so quickly that I couldn’t take any notes.

It would’ve been better for Rita to share pieces of information over several “check-ins” during the bus ride.

Something I was excited about? A snow-covered castle! I love sunny skies, but the snow glittering against the castle and moat was a special treat. Thankfully we were dropped off almost immediately in front of the castle since most of us were unprepared for this unexpected snowfall.

The tour began as a group. Rita passed out information brochures and continued to explain parts of the castle. Once she finished, we could tour on our own.

Leed’s Castle is small in comparison to the other European castles, but I believe it’s the most elegant.

It was built in 1119 by the Normans, as were over 1,000 other castles in the Kingdom. The castle passed through many royal hands until Lady Baillie bought it in 1926. She spent many years and a great fortune renovating it since it had fallen into disrepair over the centuries. Leed’s Castle was her private residence until her death in 1974 and then her private charitable fund took over its care to keep the castle “living” and benefit the public.

Although the actual castle is small, the grounds are robust with gardens, romantic walkways, a maze, falconry demonstrations, and more. Of course, due to the slightly inclement weather, most of these closed during my visit.

A volunteer recommended I check out the special exhibition, but wouldn’t tell me much about it. Intrigued, I quickly headed over to find a *drumroll please* dog collar exhibit. The guide’s anticipation left me feeling disappointed, but I stuck around since there wasn’t much else to do with snow outside.

The exhibit’s design was obviously geared towards young children with its large and colorful wall designs.

I enjoyed the pond and its swans for the rest of my time.

Due to my misunderstanding, and perhaps the miscommunication of Evans Evans, our tour did not stop at the actual White Cliffs of Dover.

The bus drove by the cliffs three times for guests to capture photos and we stopped for a quick 10-minute photo break at the boardwalk in the town of Dover. This may have been enough for some guests, but this wasn’t the experience I expected.

Even still, the color and shape of the cliffs impressed me. I imagine they’re even more impactful from the top.

Although the beginning of the tour disappointed me more than it impressed, Canterbury flipped the switch. ‘Surprisingly impressive’ best describes Canterbury.

Rita suggested the group eat at Panteli’s, a small restaurant, on the bus. She took our order on the bus and phoned in ahead of time so the hungry group could be immediately seated and served.

I ate my first dish of fish and chips ever at Panteli’s and they did not disappoint. The fish was massive and overflowing in flavor. After eating more fish and chips around London in the weeks following the tour, I can confirm Panteli’s is the best location for quality food at a low price. The fish and chips, plus a cup of coffee and apple cake, cost only 12 pounds.

An Evans Evans review has to include something good, right? I genuinely appreciated Rita for going the extra mile and organizing an event for the group. While tours are a great way for solo travelers to meet other travelers, it’s hard to get to know people while taking photos, listening to the guide, writing notes, and hurrying to catch up with the guide again. More day trips should schedule a group event during the tour, but for now, this sets Evans Evans apart from the rest.

After the meal, the group shuffled to Canterbury Cathedral.

Canterbury Cathedral was certainly the tour’s highlight. The exterior hallways with arches looked like a movie scene. I imagined a princess running through the halls, chased by nuns. The stained glass windows told marvelous stories of Christ through color and shape.

It’s easy to get Church-ed out in Europe, but Canterbury Cathedral is worth visiting yet another church.

Although their slogan is, “Britain’s Finest Sightseeing,” I can hardly agree.

I booked through Viator, having trusted this company after reading my favorite travel blogger’s fantastic experiences with the company. Viator’s tours are more expensive than Golden Tours‘, so I decided to splurge on only one Viator tour. I’m glad I did.

Aside from the tour guide’s rambling and bus driver’s unsafe navigating, there wasn’t WiFi on the bus despite advertisements of WiFi.

For calling themselves the finest sightseeing, I didn’t notice anything spectacular about the tour. That’s my honest Evan Evans review.

It was a decent tour, but I wouldn’t say the finest, and certainly not worth $15 more than Golden Tours. It should’ve at least included lunch for that price.

Overall, the day turned out better than it started. The tour wasn’t great, but I’m still darn grateful to have this experience and to see a castle under snow. That’s pretty spectacular.

What’s your experience with day trips?