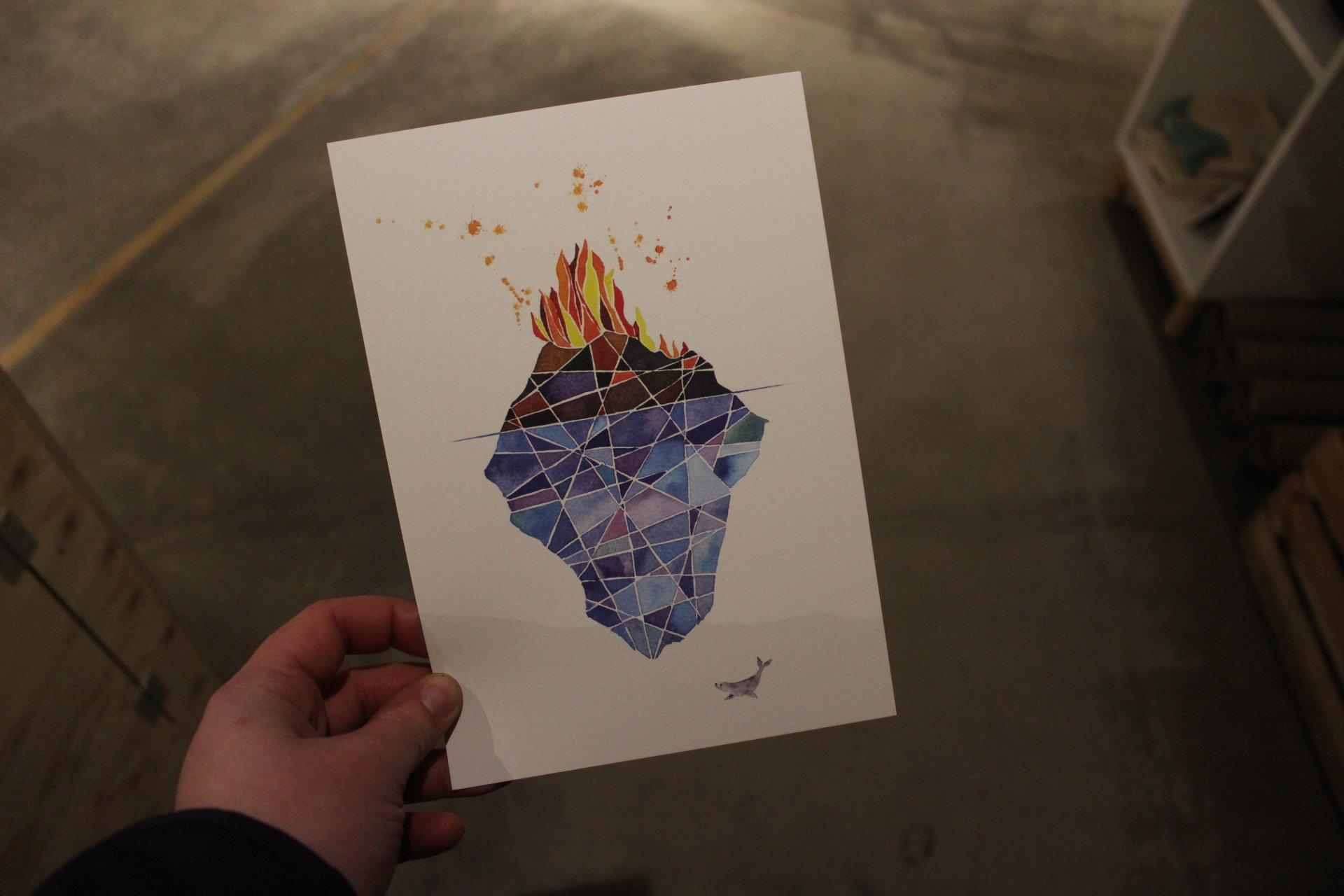 When my parents decided to take our first family vacation in several years, I told them to pick a destination and I would plan the rest. They picked Iceland to see the Northern Lights, but assumed we would play cards in the hotel the rest of the time. “It’ll be too dark to see or do anything else,” they said. Luckily they were proved wrong. And, lucky for you, I’m sharing with you this Golden Circle in winter itinerary!

Daylight is limited during the winter months in Iceland, especially around the winter solstice. We visited Iceland from the 18th-21st, thus butting our northern vacation against the shortest day of the year. Sunrise was around 11:30am and sunset around 3:30pm, suggesting there would only be four hours of daylight.

This is not accurate though.

Dawn and dusk are extended due to Iceland’s Northern latitude, adding about an hour on each end. In our case, we had daylight from around 10:30am to 4:30pm, a total of six hours.

Trust me, six hours is enough daylight to experience (and see) the Golden Circle in winter.

Tip: A tripod is a necessity for traveling in Iceland in the winter. It helps to capture the Northern Lights and during dawn and dusk’s lower lighting.

Our first stop on the Golden Circle is not a traditional stop, but it should be due to its size and surrounding landscape.

This waterfall was out of sight when we pulled into the waterfall’s unfinished parking lot and we were the only people there. I doubted my directions, despite parking where the Porufoss sign pointed.

But after walking a couple hundred meters forward, Porufoss appeared from its hiding spot. It’s curious how a large waterfall can hide, yet there it was tucked behind the steep canyon walls.

We listened closely to the soft humming of the waterfall into the calm yet fierce river below. The wind pulled us from side-to-side and pushed us to explore the area. Porufoss steals the show, but the lava fields covered in moss surrounding the waterfall and the snow-covered mountains in the background deserved attention too.

My family and I wanted to linger, but the promise of even more spectacular landscapes lured us back into our rental car and onward to the next stop.

To be honest, Thingvellir was not my cup of tea. It is steeped in history — including the first moments of Icelandic democracy — but is not the greatest stop of the tour.

At the time of our visit, parking/visitation fee cost 750ISK per vehicle and is paid near the pubic restrooms.

Do not waste time in the visitor center (the free map sucks). Instead, orientate yourself with the signs and maps around the park.

Make your way around the boardwalk-like walkway to see an overview of the park and scenery. Then make your way down the steep hill to walk in-between a fissure. At the bottom of this fissure is the location of the first Icelandic parliament, called the Althing. You can also glimpse at the split tectonic plates from a distance.

There is more to see at Thingvellir, but those are the main sites. You can explore more if the park’s history particularly interests you, but this would take away time for you to see everything on the Golden Circle if traveling in the winter due to the limited daylight.

Trudge up the rift to return to your car and make your way back to the main road in the direction you were heading. After a few minutes, you will see a sign for Oxararfoss. The walk is slightly rocky and hilly at the beginning, but is flat and paved for the rest of the 1km distance.

Oxararfoss is my favorite waterfall in the Golden Circle route because you can get so close that you feel the mist. The sound of the water pounding is strangely calming. You can watch as the water peacefully flows away, when only moments earlier it rushed to the ground.

This is another non-traditional stop on the Golden Circle, but this is the only place you should visit if you’re looking for the best-tasting and best-priced lunch.

Efsti Dalur raises its own dairy and meat cows on the farm, as well as grows many other foods it serves. At minimum, everything is sourced from Iceland. It doesn’t get fresher than that!

The burgers are tender, juicy, and absolutely to die for. My mom and I shared the Skyr burger. It might sound odd to top a burger with Skyr (an Icelandic yogurt), but the waitress highly recommended it and it exceeded all my expectations. It seriously doesn’t get better than this!

Efsti Dalur also offers a veggie burger for my vegetarian or vegan friends. All the burgers cost around $15. Order at the counter, then pick your seat near the windows to overlook the dairy cows.

It’ll be difficult, but save some room for dessert after your meal because Efsti Dalur offers the freshest ice cream in Iceland. I highly recommend the cinnamon and ginger ice cream, but the salted caramel comes in a close second.

Tip: European restaurants don’t offer to-go containers, but still offer large portion sizes. Bring a container with you in your daypack for any leftovers. It’ll stay chilled sitting in the vehicle during your other winter adventures and will make a great dinner for later.

For both a burger and ice cream, expect to spend about $20-30 total.

Unfortunately the original Geyser (named Geysir) considered nearly inactive with only a few random eruptions in the last several years. Instead, visit the Geyser complex to see Strokkur erupt.

Strokkur erupts about every five to fifteen minutes. You can tell when the water is heating up and Strokkur is about to erupt when the water rises and lowers faster than usual.

The main parking lot is next to the Geyser Center, which includes a restaurant and souvenir shop. You have to cross the road to see the Geysers.

However, if you are traveling with a handicapped person, there is another parking lot a little further up the road. It is not a designated handicap parking, but it’s only a couple hundred meters from the geysers, making it a good parking spot. Continue driving past the Geyser Center and take a left at the Y to access it.

Tip: There is a one-lane bridge immediately after the Geyser Center. Icelandic law states that whichever vehicle is closest passes through first. Be sure to stop with enough distance from the bridge to let the vehicle pass.

Gullfoss are the largest falls on the Golden Circle. There are several tiers to the falls, and therefore multiple viewing platforms are necessary to grasp the full scale of the falls.

My mom and I only visited the first viewing platform, but my father and brother-in-law went to the second one closer to the falls. Even standing at the further viewing platform, the mist from the falls was getting my camera and me soaked! Because of this, I don’t have many photos of Gullfoss.

Trust me though, it’s awesome.

By this time, the sun has probably set and night has consumed all light. It’s probably still early in the day, though, so if you have the energy you can continue exploring the Golden Circle with a stop at a relaxing geothermal spa.

Only a few locals and few other tourists were at Laugarvatn at the time of our visit. It made the experience more quaint than when we had visited the bustling Blue Lagoon. The changing rooms are chic and clean. I felt more comfortable taking my time to change and rinse at Fontana than at Blue Lagoon, where it almost felt like a race.

There are four baths at various temperatures, two saunas, and steps to the lake to cool off in between baths if that’s how you like to bathe.

It’s a romantic atmosphere at night. Strung lights hang between pools and glisten off the water. Rock decorations and the stone walkways warm the experience as you quickly walk shivering into the pool. A sigh of relief and relaxation is sure to escape your breath as you enter one of the pools.

The pools are kid-friendly, however keep in mind this is supposed to be a relaxing atmosphere so loud and active children may not fit in well. The one toddler in attendance kept himself quietly occupied. I forgot he was there most of the time.

The fontana’s website features photos advertising views of the Northern Lights from the pools. We sadly did not see the lights and the cashier said she only saw them once last year from the baths. If you’re lucky to see them, you’re in for a special treat!

Tip: Bring your own towel, because they cost extra.

I created a free itinerary specifically for driving the Golden Circle in winter. It includes the grid coordinates to all the parking locations and a timeline. Send me an email to access! hello@getawaygirl.us

You can print the itinerary and bring it on your Golden Circle in winter travels!

If you liked this article, share it with a friend and leave a comment below. Do you have plans to visit Iceland anytime soon?